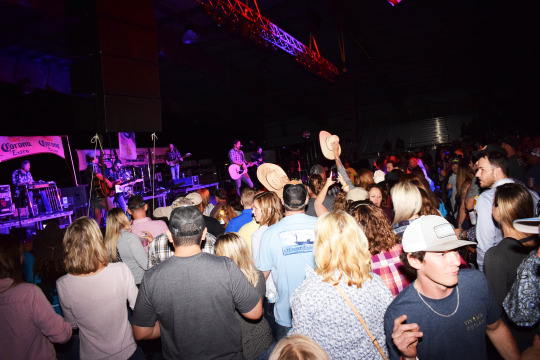 The two biggest events of the year hosted by The Peter W. Busch Family Foundation are the Wild Game Dinner and Treasure Coast Bull Riding.

After 14 years of bull riding success, the foundation has organized The Busch Foundation Concert Series in place of the bull riding event to give the Treasure Coast something different.

Southern Eagle Distributing and The Peter W. Busch Family Foundation teamed up with iHeart Radio’s WAVE 92.7 who hosted the 1st Annual Busch Foundation Concert Series in Adams Arena at the St. Lucie Fairgrounds in Fort Pierce on January 19th. Sponsored by Corona Extra USA, 100% of the proceeds go directly back to the community through local charities and organizations.

At 4:00 p.m. the gates to the Fairgrounds opened giving guests time to peruse and shop among the many vendor booths and grab food and drinks before heading into the Arena.

The award winning group High Valley took the stage next further ramping the excitement of the evening. With their “pop-grass” style, they’re mostly known for their two popular hits, “Make You Mine” and “She’s With Me.”

Headliner, Joe Nichols, brought the Arena down. Mostly known for his popular hits such as “Brokenheartsvillle” and “Tequila Makes Her Clothes Fall Off”, his last album, Crickets sent both “Sunny and 75” as well as “Yeah” to Platinum-Certified Number One Status.

This is definitely an event you will not want to miss next time!

The foundation was created in 1990 by Southern Eagle Distributing owner and Anheuser-Busch heir Peter W. Busch to to support, enrich and enhance the very community in which it was started. Formed 30 years ago in Ft Pierce, FL, Peter W. Busch believed in supporting initiatives that improve the quality of health, education and family in his community, as well as, the preservation of Florida’s indigenous animals and landscape.

HELP YOUR COMMUNITY AND DONATE

100% of All Proceeds go to Charities!